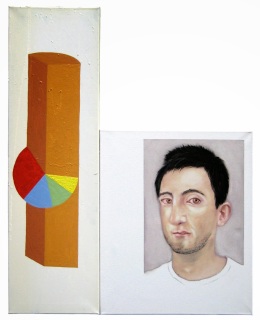 Amir Chasson treats the art critic of the Evening Standard’s lacerating comment about his paintings at the Saatchi Gallery as a triumph. ‘When I knew I was going to be in that Saatchi exhibition, I assumed Brian Sewell would review it and I was worried I wouldn’t be mentioned. He said that my work looked like a Sunday painter’s, an amateur from Ponder’s End. That was great. I didn’t get enough bad reviews. Sewell giving me a bad review is a great accolade. A lot of artists don’t get reviews good or bad, none at all. Indifference is what’s painful. No reaction is what hurts. A bad review is as good as a good review.’ Chasson’s response to such a potentially demoralising comment in print is surprising and almost incredible but he is defiant, translating adversity into advantage, displaying some of Andy Warhol’s inverted logic.
What riled Sewell are Chasson’s imaginary portraits resembling caricatures or cartoons. Exhibited in a show called ‘New Order: British Art Today’, Chasson aligns these exaggerated faces beside diagrams of indeterminate graphs, maps and bar charts. Eyes are lopsided and noses curve out of perspective. They begin to resemble those Victorian heads illustrating the science of phrenology that attempted to reveal intelligence or degeneracy in the shape of a skull. These faces are discomforting in their collapsing details. The simulated diagrams allude to rationality but are paradoxical fictions awkwardly meeting in paint. Chasson seems drawn to that friction between our faith in concrete information and the subjectivity of both making and looking at a painting.

Chasson greets me at his studio in a building run by Acme, offering warm and affordable space to artists, so different from the romantic myth of ramshackle attics.  The studio is surprisingly tidy even though he shares it with another artist. Large canvases from past exhibitions are rolled up inside tubes and several unfinished paintings are hung along the walls. Wearing a pair of modish glasses he has the appearance of an educated, urban professional. He is on a roll now, on the cusp of wider recognition and new opportunities, positioned where every ‘emerging’ artist wants to be, showing work in exhibitions, being reviewed and finding recognition.
Chasson remembers the process of entering the notorious Saatchi Collection as rather impersonal and never discussed the sale with his influential patron. The ICA, then hosting ‘New Contemporaries’, simply called him and said ‘off the record’ that ‘Charles’ was interested in buying the paintings and would he mind? Being bought and exhibited by Britain’s leading collector of contemporary art, Charles Saatchi, might represent a defining moment in an artist’s career. Damien Hirst and Tracy Emin are proof of that. Amir Chasson demurs but concedes that it’s helpful in getting noticed and reviewed. ‘I don’t know how valuable it is. My initial response was, oh great, I’m going to make some money from that show. I didn’t even know he would show the pictures. I swear I didn’t even look at the Saatchi website. You don’t do that as an artist, you just don’t. You have to keep thinking about the next painting. You can’t keep thinking about what you did before. Your reference points are your friends and colleagues, people you studied with, those you look up to.’ He seems grounded enough not to get carried away by this lucky break, but confesses ambivalence about the process. ‘Sometimes I get this feeling it’s not prestigious anymore to be in the Saatchi, but of course I would be happy to sell more paintings to him.’
This begs the question how comfortable he is with success and what really drives him. He offers that ‘it’s very hard being an artist in London,’ which seems a truism and I press him to elaborate. Does he mean financially, professionally?  ‘Yes, of course, all of that. Financially, you can deal with it by freelancing, sharing a studio, by working from home. The greatest difficulty is the intellectual, psychological challenge of who am I in this crazy, insane, saturated, money-driven world. All the other things, health, money, wellbeing comes later, if at all. Because when you make artwork, all that goes out of the window, none of that matters.  When you are in the ‘zone’, finally in the studio and have ideas and are executing them, then it’s a high, a sort of happiness, it’s where you need to be like being in the womb.’
He talks with animated conviction while his hands appear still and controlled.
After many years working as a graphic designer and teacher in Tel Aviv, he seems to have found his direction and a professional integrity by his mid-40s . Compelled to take an MA in design by the college that employed him, he researched Hebrew typography by distributing questionnaires in the street. Surely, it had a practical application for communications? ‘I hated every minute of it and decided it was pointless but somehow they liked it. It was the equivalent of why English readers might prefer the fonts, Times New Roman or Helvetica.’
Chasson is a curious iconoclast, teasing established orthodoxies from masculinity to the art world itself. He recounts persistent alterations of any commercial brief or syllabus.  ‘I have always had a subversive streak like Marcel Duchamp, one of my heroes at school like many artists nowadays. I was always attracted to how he makes fun of science and makes science ridicule itself.’ In early, animated films, made in Israel, which he now calls ‘a bit silly’, he took risks by satirising military heroes or putting Arab lettering over posters celebrating the anniversary of Israeli independence. Even more provocative was the use of Palestinian propaganda. ‘Guy, my partner and a journalist, used to travel to the West Bank and bring back little postcards that showed ‘shaheeds’ or heroes, which will probably be shocking for some Israelis. They did some horrible things obviously like exploding themselves on buses. But that’s an example of the source material I was using.’ Machismo remains an enduring interest. During his residency in Rome, he made a very large painting merging images of a heavy marble head in the Capitoline museum with muscular actors posing as gladiators outside the Colosseum and young Romans sweating inside Goth clothing on the street.